We're also looking back at one of our fondest decades for cinema - vote in our Worst Movies of the 90s poll!

So here we are yet again at the end of a year that saw a few great films, but also saw a lot of not-so-great ones. We've tallied up the hundreds of thousands of votes cast by RiffTrax fans, and we're pleased to be able to finally present you with our list of the Worst Movies of the year!

Finally, a 300 prequel to answer the question: what happened to all the shirts?

Favorite scene: when all the guys start chanting “THIS IS SPARTA!!...WELL IT ISN’T QUITE SPARTA YET, BUT IT’S WELL ON ITS WAY TO BECOMING SPARTA, LOOK WE’RE DOING OUR BEST, OKAY?”

Click here to get our riff on the first 300 movie. TONIGHT... WE RIFF IN HELL!

How do you zazz up the most cataclysmic story in the Bible? Easy! Add fallen angels who become battlin’ rock monsters! It’s a knock-down drag out stone-fisted Genesis Retcon, and this time it’s heretical. Starring Russell Crowe, Jennifer Connelly, Green Alligators, Long-Neck Geese, Humpty-back Camels and some Chimpanzees.

An adorable suburban couple try to revive their romance by making a video of themselves having sex, because that always works. They manage to shoot eleven different angles of themselves from a single iPad. But oh no, their sex video got up on the cloud and now they can’t get it down! What are they gonna do?!

According to Rotten Tomatoes, Ouija was “definitely a movie” that “came out in theaters” and “not just something you guys made up to mess with us.” Hey, why not take a minor prop used in dozens of B movies and make that prop the whole movie? Only the spirits know the answer.

A thrilling summer popcorn flick that critics have described as “performing satisfactorily in overseas markets” and “providing an adequate return on investment firms’ money.” This year, the catchphrase on everyone’s lips was “Huh...Guess they made another one...” when they saw that boxes of Frosted Flakes came with a free Spider-Man yo-yo.

Remember when Spidey was played by Tobey McGuire? We have commentaries for each of those films!

Unjustly derided by critics upon its release, Left Behind is one of the all time greatest films that people did not watch but still rated one star on IMDB, asked us to riff, then promptly forgot about. Nicolas Cage reprises his role as Jack Left for the third movie in the trilogy after the equally derided Left Ahead and Left In The Middle.

Chad Michael Murray co-stars as “No, I wasn’t the third son on Home Improvement. Yes, I’m sure.”

Seth MacFarlane’s relentless juggernaut of pop culture dominance is delayed oh-so-briefly by a movie that pretty much died, in the West and elsewhere. A Million Ways to Die in the West II: The Quickening will NOT make the mistake of omitting a drunken, lecherous teddy bear. For a li’l change of pace, Liam Neeson plays a guy who is good with guns.

The pompous speech-giving anchorman from HBO’s The Newsroom falls back into the dimensional portal he escaped through years ago, and is sucked back into his former parallel-universe life: Jim Carrey’s low-IQ sidekick with constant explosive diarrhea. They wear wigs too!

If you’d like the experience of seeing this movie but prefer not to give any portion of your income to Michael Bay, just have a screaming lunatic beat you into unconsciousness with small engine parts.

(Accidentally bought the first three Transformers movies, but don't feel like sitting through them again? Give them the RiffTrax treatment!) 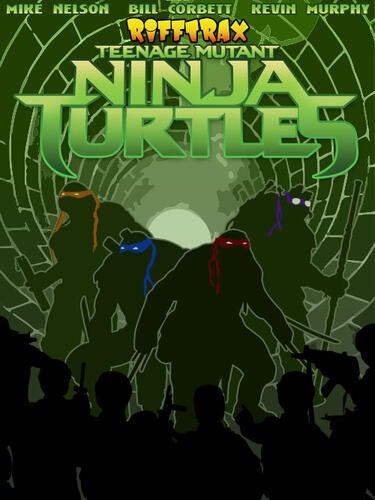 Finally, advances in CGI technology and film wizardry are able to create a Megan Fox so lifelike you’d swear she was actually human.

Thanks to everyone who voted in our Worst Movies of the Year poll!

You asked for it! Here it is!

The RiffTrax of Teenage Mutant Ninja Turtles is now available.

We've got tons of good and bad movies merged with our jokes waiting for you to Download or Stream! Take a look at some of our favorites like Super Mario Bros., Cool as Ice, Cyborg Cop 2, and Fun In Balloon Land. Want a new way of watching your favorite DVDs? We have a bunch of funny commentaries for those too! Check out our "riffs" on The Room, Twilight, Batman, The Avengers, X-Men, The Matrix, Star Trek, Star Wars, and more here!

Sharing The Worst Movies is the best!

What was your favorite bad movie of 2014? Sound off below!