Like so much Trek, Voyager's high concept is brilliant, but its execution is, shall we say, somewhat flawed. Ostensibly about a solitary Federation ship in uncharted territory having to mix with a renegade Maquis crew, searching for a way home and having to adapt and take drastic measures along the way, the show quickly becomes a reset button-laden TOS wannabe. With the pilot, we get a blobby alien who brings ships into the Delta quadrant so it can pretend to be an old woman offering corn and/or an old grumpy man who plays the banjo. It also likes to become a flirtatious young woman. Less said about that, the better.

The pilot also introduces us to a race of Thunderdome rejects who haven't figured out water but have spaceships. They like to talk about how useless other races are. We also meet the disturbingly nude Neelix. Janeway decides to strand them all 75 years from home with little to no thought and for vague, seemingly unnecessary reasons. It's a fun ride for all.

Ice on Mars is formed of Michael T Bradley and various guest riffers.   Joining Michael for this first outing is Jason Freston, his cohort on the podcast Acts of Treason, still available at www.holynightmare.com. Jason is a slightly bigger geek than Michael, which applies even more so when it comes to Star Trek. (Michael is pretty sure Jason can tell you every Trek captain's Kobayashi Maru story).

Now that the entire first season of Voyager has been riffed, please enjoy every available product. They are:

107: Eye of the Needle - Riffed by QuipTracks

111: State of Flux – Riffed by TreacheRiffs 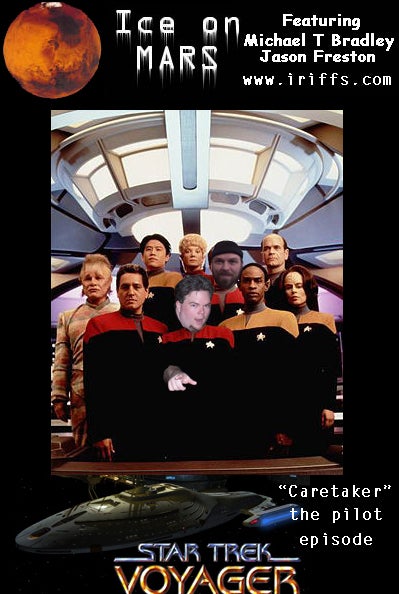