Do janitors really have anything better to do than to repair windows?  How does a high school prank end in murder?  What does a turtle have to do with your safety?  Did you know that a newspaper can save your life?

All of these questions will be answered... well maybe not answered... explained... somewhat... well that's not really true either.  I guess they'll be at least glazed over in the first Video On Demand iRiff from Raven's Riffs.  The first of the 2 shorts in this presentation is an antivandalism film from the 1970s called "Destruction: Fun or Dumb" and the second is "Duck & Cover," the instructional video presented to children in the 40s on how to protect themselves from a nuclear blast by falling down and covering their heads.  Seriously... a NUCLEAR BLAST.  It's 23 minutes of fun featuring some of the worst impressions in all of iriffs (don't say I didn't warn you).

Stinger for this short

I'm also a contributing writer for -

Riff Raff Theater-(All titles to date except Harry Potter and the Sorcerer's Stone and Alien vs. Predator) 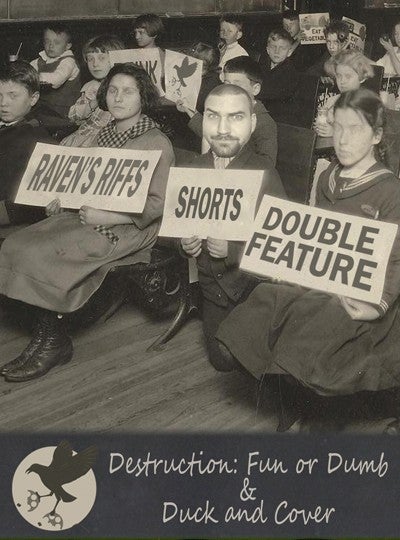