ART - Beauty and the Beast

ART - Beauty and the Beast

Chris Wolvie's sole purpose in the Animation Ripping Theater (or ART for short) is to destroy beloved (and a few loathed) animated movies.  And none is more beloved than the Best Picture Academy Award-nominated Disney classic about a lovely, intelligent girl and a massive walking furball with fierce orthodontic problems and a fuse shorter than the Enchanted Objects who wait on him paw-and-claw.  So what happens when the most beautiful girl in a poor provincial town meets a transformed prince who's spent ten years without human contact and a mirror which can show him any girl's bedroom in an instant?  Well,...let's just say it's amazing what an act of kindness, some kindergarden teaching and a low-bodace dress can do for a guy's attitude.  With the voices of Robby Benson, Paige O'Hara, Angela Lansbury, Jerry Orbach and David Odgen Steirs, how can this highly-successful film deserve a ripping?  Three words: Tony...Jay...cameo.

This is Wolvie's inaugural Work of ART...and, as such, is relatively unrefined given the equipment used (not everyone can afford to use a recording studio).  Partly because of this - but MOSTLY because this IS his first shot at an iRiff - this Work can be yours for the amazingly low price of one dollar and ninety-nine pennies!  Act now and you'll get this self-moving featherduster who speaks French!

WARNING: EXPLICIT CONTENT - Just because the FILM is G-rated doesn't mean the WORK is.  This is not for the kiddies.  This is for the grown-up children who suddenly realized that their cherished childhood memories weren't all that great.  As such, this Work contains many an innuendous comment and quasi-harsh language.  Parental discretion is adviced...though not expected, really. 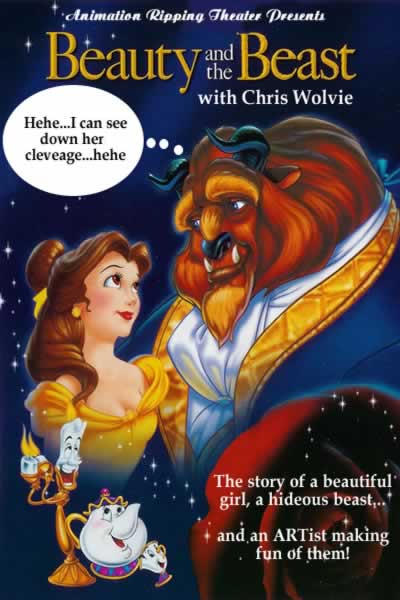