In this, the ... seventh or eighth episode of Voyager (is the pilot a two-parter or one double-sized episode? The debate rages on), after dealing with banjos, time paradoxes, time paradoxes, organ theft, an angry cloud and a wormhole that gets them all home, you'd think Voyager wouldn't have much left to do. But they do! Yes, that's right, in this, the first post-'we're home!' story of the Voyager epic, set SURPRISINGLY early in its career (at only the eight! ... or seventh ... episode!), we begin the 'Hunt down and kill all the Maquis' storyline that will run for the next six and a half years. Amazingly enough, Chakotay and all the other Maquis (can you name them? B'Elanna, Seska and ... that one guy?) go along with this, because the magic of Starfleet has infused their souls with peace and love for all mankind! Except the hated Maquis.

We begin with the first trial of the many Maquis war criminals -- all right, all right, FINE. FINE. The wormhole was a lie! There were no Romulans OR cake at the other end of it! Everybody's still stuck out in the Dumbass Quadrant, or whatever it is. And Paris is accused of MURDERING someone. Not only accused, but in fact tried in a courtroom that includes an artificial lifeform given the deceased's memories. Isn't that AWESOME? Yes, it is! So we don't see any of that. No, we get the after-effects, wherein Kim drones on and on with gripping narration like, 'And then we went in the other room.' Tuvok goes into security chief mode and figures out if Paris REALLY DID kill that dude (CAN YOU GUESS THE TWIST ENDING? HINT: HE DIDN'T). And everybody has feathers or scales or some leftover prop department silliness on their head.

Rounding out disc 2 is Ice on Mars' "Ex Post Facto," featuring everything you ever wanted to know about some planet we'll never see again's legal system (hint: it'll let you get a guy off in less than 45 minutes ... and yes, that's a straight man line if I ever heard one). This ends the giant mega super crossover between ....

...and us (we're right here). This time Michael T Bradley is joined by Josh "Twilight" Robinson and, of course, Fron"Voyager"dy to ensure hilarity ensues and synching occurs.

Rent it via Netflix!

Buy it at iTunes!

Rent it at Blockbuster Online!

Note: This riff contains about as adult of material as you'd expect to see on basic cable channel at 10E/9P, mostly innuendo and WITTY BANTER. 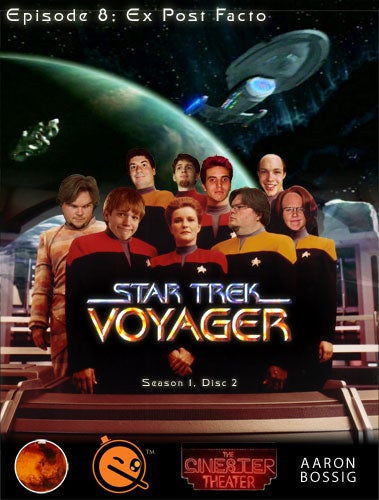