Cinester Theater, Aaron J. Bossig, Quiptracks, and Ice-On-Mars invite you to boldly go... where Ice-On-Mars has sort of already gone, incidentally. Still, he was nice enough to invite the rest of us along for this crazy ride, and the result is a fully-riffed version of "Star Trek: Voyager - Season 1, Disc 2"! Cinester Theater is at the plate first; they've dusted off their comedy-cleats, taken a few test swings with their baseball bat of.... laughs, I guess, and they're ready to take on "Phage"!

Meet Neelix. He's the Jar Jar Binx of "Star Trek", and somebody stole his lungs. An intelligent group of protagonists might recognize a good thing when they see it, but this is Voyager, so that's right out the window. Based on some misplaced sense of responsibility (or some heavily skewed market research numbers concerning the popularity of the Neelix character) Janeway and her crew waste no time in looking this particular gift-horse in the mouth and set out on a desperate quest to get those lungs back. When the intrepid crew blunders into an asteroid that's actually a Fun House Hall-Of-Mirrors, they encounter a mysterious group of aliens that look like wads of ABC gum.

Will they find Neelix's lungs in time? Will anyone care if they don't? And when do they add that hot Borg supermodel to the cast?

Some of these questions will be answered when Cinester Theater Presents: Star Trek Voyager - Phage.

And keep an eye out for the rest of "Star Trek Voyager, Season 1: Disc 2" iRiffs:

"Eye of the Needle" - Riffed by Quiptracks 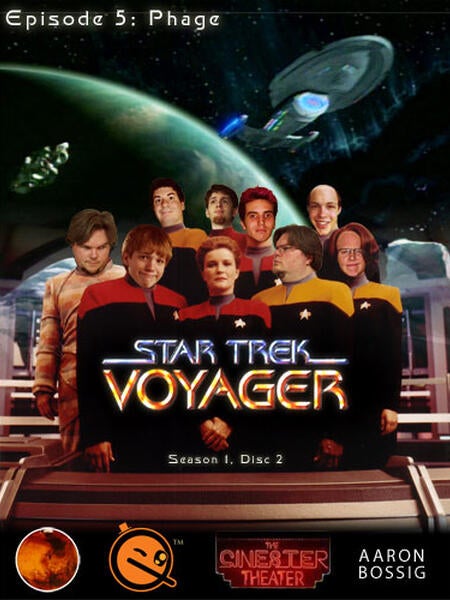