Imagine your entire society was plagued by a horrific disease that caused insanity-inducing pain and eventual breakdown of beauty to the point of grotesquerie. You are a biologist in said race, no longer racing against time but reduced to waving a faded standard in the face of encroaching annihilation. But forsooth! A glimmer of hope appears from the ether! A space-faring group of races from far away, whom you should really have never met within the span of your lifetime, but through the blind intervention of miraculous fate, has appeared on your doorstep. One of these races appears to have hardy DNA which could hold the secret to eliminating your own disease! And--and the specimen you've captured ... could--could she possibly not see you as a walking horror show? Could she possibly feel ... love ... for one such as you?

Haha, probably not, prune face. Also, if you were being written by the Voyager writers, even though you're obviously the most intriguing and convoluted character to appear in this episode you'd be relegated to the background and tossed aside at a moment's notice. Oh, prune face, I can do nothing but chortle in an extended manner at your ridiculous fate.

Hey, do you like vague, tension-free stories involving miners and oppressive gun-toting villains? Do you thrill at the thought of an away team wandering around uninterested while other members of the crew are held captive? Does this sound like a retread of "Time and Again" in a lot of ways? Well, it IS, except it's really more a retread of a classic TOS episode, and the return of the Phage bad guys from "Phage" with nothing new said about them. With all that "homaging" squeezed into 45 minutes, that means there's really time for NOTHING original in this damned hodgepodge of mishmash and ... pishposh? I dunno, that got away from me there.

In any case, join Kaisha Medford and Michael T Bradley as they tackle this unforgiving beast of an episode, in which actors wear prosthetics (no, really) and B'elanna's Klingon half is shown to be far more interesting than her human half. Dare you experience the terror that is "Faces"? This track features some mild profanity and adult themes, probably nothing worse than an episode of "Robot Chicken."

Previously on this disc: See J.C. Walsh take on Cathexis

And come right back home with us to finish off the disc with Learning Curve. 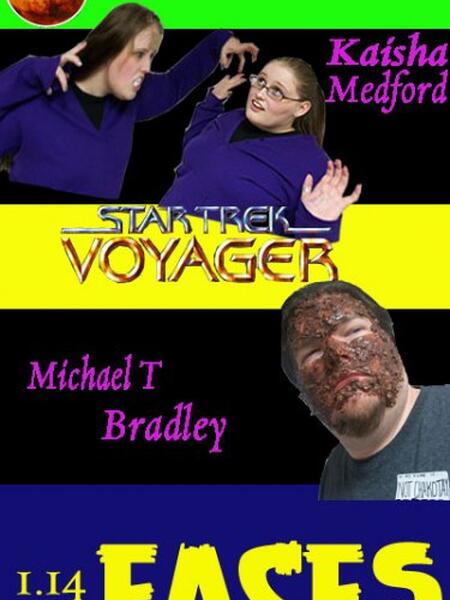