Every now and then something so horrible, so terrible, so soul sucking comes along that the only way to cope is to pretend it never happened.  Thus is the case with Highlander 2.  Amazon can't even be bothered to list the right actors on its sales page.  In the theatrical version of the film the immortals came from the planet Zeist and were exiled to Earth where they would be immortal.  In this version, (now the only one available outside of a VHS off e-bay) they were exiled from the distant past where they were also immortal. This was supposed to make the movie better and the origins of immortals more palatable to Highlander fans.  Sadly it did neither and now the movie makes even less sense.  As a result the rest of the Highlander series completely ignores Highlander 2.  Unfortunatly, ignoring a problem is an unhealthy way to deal with it.  So instead of blocking Highlander 2 from our memories, let's deal with this horrific tradgedy by facing it head on.

Join me as I take on one of the worst big budget films ever made and riff it mercilessly.  Reel over the horrible dialogue.  Try to keep track of the countless continuity errors.  Gene Siskel described it as a movie,  "who's only redeming value is that it ends."  He was absolutely right; it does in fact end.

I have also been informed that the PAL version of the movie will sync with the NTSC version so if you have the PAL disc this track should sync to it.

(note:  This track was made for Highlander 2, not Highlander 2:  The Quickening.  If you have the Renegade version you should be fine.  The Special Edition I worked from is only different in that the special effects were enhanced.)

To celebrate the release of FireRiffs second riff, FireRiffs Presents:  Superman Returns is now only 99 cents! 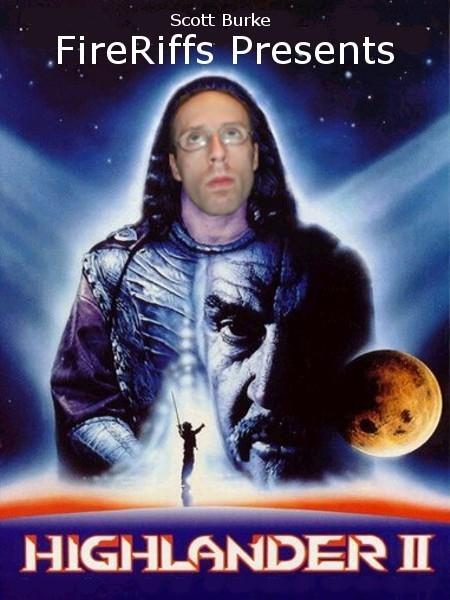