Cinester Theater Presents: Back to the Future, Part 3

Cinester Theater Presents: Back to the Future, Part 3

No. No more time travel.

Look, it's not that we don't want to... it's just that there's only so many jokes we can think of, you know? I mean, we tried really hard to make "Back to the Future" and "Back to the Future, Part 2" more bearable with our hilarious quips, gags, and jokes... but our well of time-travel hilarity is starting to run dry.

Which is why we put out the call to YOU, the fans, for help on riffing the third and (thankfully) final installment of this time-travel trilogy, "Back to the Future, Part 3"!

Marty and Doc Brown are back in the past, circa 1885. Wreaking untold havoc on the timeline by pretending to invent things like Frisbees, refridgerators, and fantastic flying space-trains, the time-traveling duo must also outwit crazed gunslinger Buford "Mad Dog" Tannen, who this time around has a little more than noogies in mind for any "buttheads" that cross him!

With recycled scenes and dialogued, and an awkward romance subplot for Doc, "Back to the Future, Part 3" will make your skin crawl even as it makes you scratch your head in confusion as to why they thought anyone would want to see a much-beloved series held down and shaken for every last penny!

Fortunately, Shawn and Keith are here with a script written almost entirely through fan-submissions, and they're going to turn this sad final chapter in an otherwise lovable franchise into a nearly two-hour carriage ride of comedy!

Thanks again for the stellar jokes, everyone! 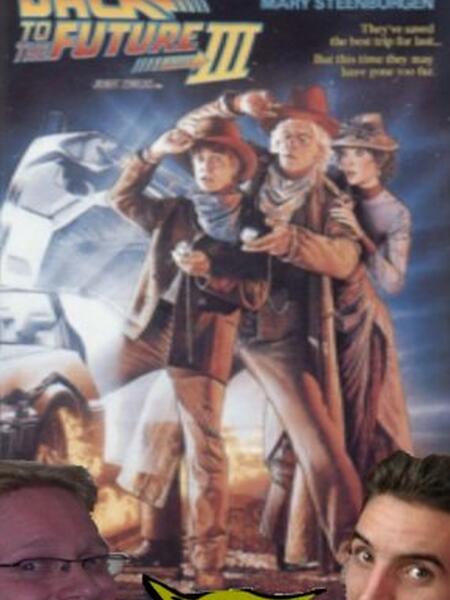