Cinester Theater Presents: Back To The Future, Part 2

Just when you thought it was safe to go back into the timeline, Doc Brown comes exploding back into your life with an all-new wacky adventure of irresponsible science! Just returned from nearly destroying himself and the entire universe, journeyman time-traveler Marty McFly just wants to enjoy a quiet weekend with his inexplicably re-cast girlfriend. But when Doc Brown returns to drag the pair to the future of Hill Valley, Marty wastes no time in once again jeopardizing the timeline and threatening to wipe us all out!

Cinester Theater invites you to come back with them... Back To The Future, Part 2, that is! Join Shawn and Keith, and their irrascible pal Syncy The Sync Goblin, as they take on one of the most overrated sequels in the history of cinema! Chock full of hilarious misconceptions about the futuer of civilization, scathing social commentary on the economy, and more incest jokes than you can shake a stick at, "Cinester Theater Presents: Back To The Future, Part 2" is one more hilarious odyssey through time and space that you'll never forget!

Oh, and if you haven't watched it already, be sure to check out "Cinester Theater Presents: Back To The Future"! And take a look at their other iRiffs, too! 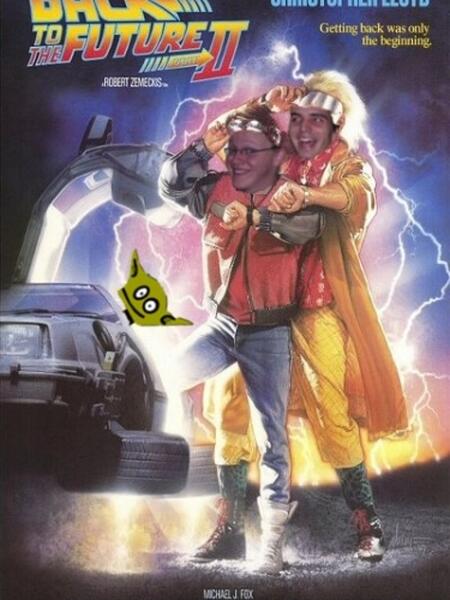