"Weird Al" Yankovic, the undisputed king of pop culture parody, has sold more comedy recordings than any other artist in history. In a career spanning nearly three decades, he has amassed 28 Gold and Platinum albums, 7 Gold and Platinum-certified home videos and 3 Grammy Awards (with 9 nominations).

An accomplished director, Al has helmed many of his own award-winning music videos as well as clips for Ben Folds, Jeff Foxworthy, The Jon Spencer Blues Explosion, Hanson and The Black Crowes. His video for "Smells Like Nirvana," nominated for an MTV Video Music Award in 1992, was chosen by Rolling Stone as one of the "Top 100 Music Videos Of All Time." Al also created the critically acclaimed title sequence for the Leslie Nielsen feature film "Spy Hard."

Making a successful transformation from pop music satirist to multimedia star, Al created his own television specials for MTV ("AL-TV"), Showtime and the Disney Channel, among others. His feature film "UHF" (1989) became an instant Top Ten best-selling DVD upon its release in 2002, and his CBS network series "The Weird Al Show" reached cult-classic status and was released on DVD earlier this year. Al has been featured on numerous TV shows and specials, and his profile on VH-1's "Behind the Music" remains one of the most popular installments in the history of the series.

The centerpiece of Straight Outta Lynwood is "White & Nerdy," a parody of Chamillionaire's No. 1 smash hit "Ridin'." Al directed the highly-acclaimed video clip, which features hilarious cameos by Donny Osmond, Seth Green, Judy Tenuta and Mad TV's Keegan-Michael Keys and Jordan Peele. The "White & Nerdy" video became a massive pop culture phenomenon as the #1 video on VH1 and iTunes for 5 weeks straight, with over 30 million views on YouTube and MySpace alone.

Straight Outta Lynwood also features parodies of Green Day ("Canadian Idiot"), Usher ("Confessions Part III"), Taylor Hicks ("Do I Creep You Out") and R. Kelly (the 11-minute epic "Trapped in the Drive-Thru"), as well as the now-traditional polka medley ("Polkarama!"), which this time includes accordion-fueled renditions of hits by such artists as 50 Cent, The Black Eyed Peas, Snoop Dogg, Coldplay, Weezer, Pussycat Dolls and Kanye West.

"Don't Download This Song," the first song and video released from the album, is a tongue-in-cheek look at the hot-button issue of mp3 piracy, set to original music inspired by the celebrity-driven charity benefit songs from the '80s. The song was ironically offered as a free download on Al's web site (weirdal.com) and MySpace page (myspace.com/weirdal), and quickly became a viral worldwide hit. Other original compositions on the album include an homage to both Brian Wilson and internal organs ("Pancreas"), an ode to computer-based paranoia ("Virus Alert"), a headbanger about frivolous lawsuits ("I'll Sue Ya"), an anthem for the relationship-impaired ("Close But No Cigar") and a cheery ditty about the most festive time of the year ("Weasel Stomping Day").

The "Straight Outta Lynwood Tour" in the summer of 2007 saw "Weird Al" Yankovic and his band (the same talented group of musicians that has performed with him since 1982) perform 119 shows throughout North America and in Australia and New Zealand. Al and the band will be touring once again in the summer of '08 - with tour dates to be posted and all other things AL to be found on his official website at www.weirdal.com. 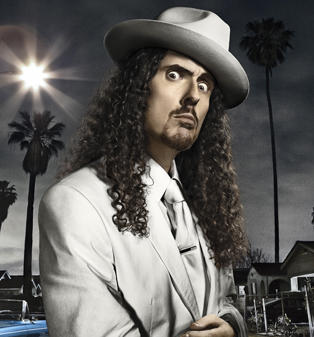