The riffing team from the That Guy with the Glasses web site is Doug Walker (The aforementioned "That Guy"), his older brother, Rob Walker (The Other Guy), and their friend and personal astrologer, Brian Heinz (The Last Angry Geek).  Together, and apart, they've been making fun of things since they were able to talk, and it's now of some small satisfaction to their parents that they get paid to do this.

Doug decided to start a web site where he could review and poke fun at everything from beloved childhood memories to modern day films.  This became TGWTG.com and he was joined early on by Rob, and then later Brian, the site is responsible for such video hits as "The Nostalgia Critic", "Bum Reviews" and "The Bjork Show".

All three men live in the suburban Chicago area and look forward to a day when a man is judged, not by his physical qualities, but by how hard he can mock a movie. 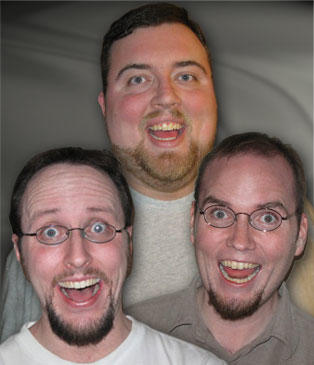