America's loudest lounge singer Richard Cheese performs swingin' Vegas versions of rock, rap, and Top40 hits, "swankifying" contemporary songs into traditional pop vocal standards.  Cheese has sold more than 135,000 CDs; his albums include Lounge Against The Machine, Tuxicity, I'd Like A Virgin, Aperitif For Destruction, The Sunny Side Of The Moon, his Christmas album Silent Nightclub, his TV Themes album Dick At Nite, and his forthcoming Viva La Vodka and Lavapalooza.

The hardest working Dick in show business has played sellout shows around the world, from New York to New Orleans, from Las Vegas to London, from Portland to Portugal, from Hollywood to Honolulu.  His songs have been featured in the movie Dawn Of The Dead and the NBC-TV shows Las Vegas and Passions, and he's appeared on Jimmy Kimmel Live, CNN, MTV's Say What Karaoke?, Howard Stern, Fox News Channel, and NBC's Last Call with Carson Daly as the house band.

With his swanky jazz trio, his tiger-striped tuxedo, and his enormous microphone, Richard Cheese presents the perfect mix of music, martini, and madcap. 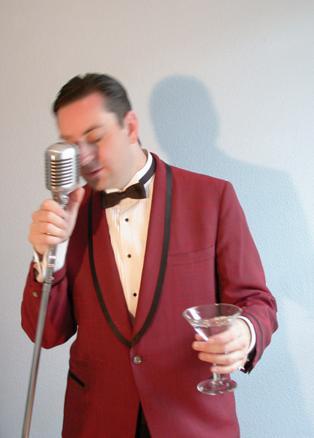