Paul F. Tompkins is from Philadelphia, PA, where he started performing stand-up comedy in 1986. In 1994, he moved to Hollywood, CA, which led Paul to a stint as a writer and performer on HBO’s MR. SHOW WITH BOB AND DAVID where he was nominated for an Emmy award for writing. Paul also wrote and starred in his own one-man show, DRIVEN TO DRINK, for HBO.

In 2000, Paul played the title role of "Peter" in the Warner Bros./NBC unaired pilot called THE PETER PRINCIPLE which led to Paul being cast as "Sullivan Pope" in the situation comedy DAG for NBC. His other acting credits include FRAISER, THE SKETCH SHOW on Fox, DreamWorks’ ANCHORMAN and New Line TENACIOUS D and the Pick of Destiny movie.

Paul’s stand-up has been featured on LATE NIGHT WITH CONAN O’BRIEN, COMEDY CENTRAL PRESENTS…PAUL F. TOMPKINS and Paul garnered a WGA nomination for his work as a writer & correspondent on HBO’s REAL TIME WITH BILL MAHER.

Recently, Paul has been featured on episodes of WEEDS (Showtime), SARAH SILVERMAN PROGRAM (Comedy Central), HELP ME HELP YOU (CBS) and PUSHING DAISIES (NBC), and regularly on LEWIS BLACK’S ROOT OF ALL EVIL (Comedy Central). Paul also recently appeared in the theatrical features THERE WILL BE BLOOD and THE INFORMANT.

In addition to acting and creating film/television projects, Paul has frequently presented THE PAUL F. TOMPKINS SHOW to sold-out audiences at Largo in Hollywood - a live variety program that has Paul hosting the likes of Jack Black, Dave Foley, Andy Richter and Aimee Mann.

Most recently Paul has been seen as the host of VH1’s BEST WEEK EVER WITH PAUL F. TOMPKINS and his latest standup special for Comedy Central, YOU SHOULD HAVE TOLD ME, premiered on Comedy Central June 11th, 2010. His latest CD FREAK WHARF was released in December of 2009 and immediately went to the top of the iTunes comedy charts. 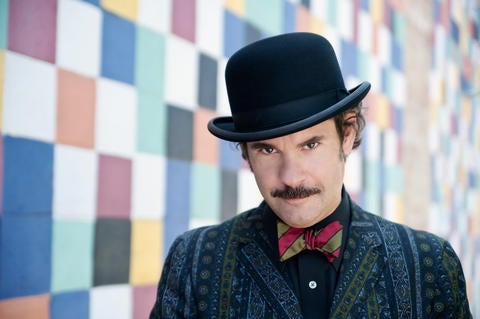