Paul Sabourin and Greg "Storm" DiCostanzo grew up in the suburbs in the '70s and '80s, which explains a lot. Eventually, after a lot of boring stuff, the two met and helped found the Washington, DC-based a cappella band Da Vinci's Notebook, becoming the group's main songwriting team. Da Vinci's Notebook retired after 12 years of touring nationwide, at which point Sabourin and DiCostanzo became the comedy/music duo Paul and Storm. Anyone with ADD would appreciate the broad range of territory that Paul and Storm cover in their music...Chicken nuggets. Love. Boxing nuns. Relationships. Pirates. Friendship. James Taylor engulfed in flames.

Catchy melodies and well-constructed music underpin the comedy, and in live performance their harmonies draw comparisons to the Everly Brothers, while their stage presence evokes the Barenaked Ladies. They will do nearly anything to win the hearts and minds of their audiences, and often throw Twinkies, Moon Pies and/or other snack cakes into the crowd to help seal the deal. Occasionally, panties are thrown back. Paul and Storm's music is often heard on the "Bob and Tom" syndicated morning radio show, and has been heard on Comedy Central, ABC's “The Drew Carey Show”, XM Satellite Radio's "Dr. Demento" show, and on the popular web cartoon site Homestarrunner.com. BONUS: their live show is better than 1,000 Fonzies, and more spellbinding than Mr. T on a unicycle.

All of their music (along with lots of other trinkets and shiny things) is available from their website, www.paulandstorm.com.

Latest riffs by Paul and Storm 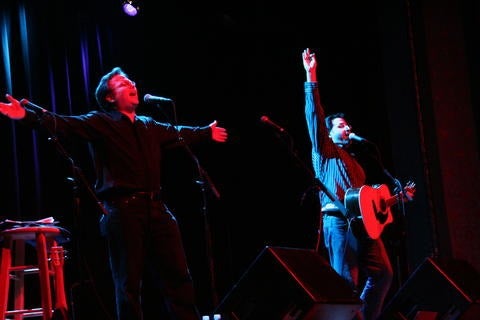