Matthew J Elliott is a British writer and performer who lives in the town that spawned Georgie Fame, author of Lost Horizon James Hilton, Colin “Chariots of Fire” Welland (his actual middle names, believe it or not), and, apparently, the guy who invented the Spinning Jenny during the Industrial Revolution, but never thought to patent it.

Matthew is the author of Big Trouble in Mother Russia and Big Trouble in Merrie Olde England (both authorized sequels to the classic cult fantasy movie, Big Trouble in Little China), and Lost in Time and Space: An Unofficial Guide to the Uncharted Journeys of Doctor Who.

He has scripted a number of official Doctor Who audio dramas, as well as over 300 episodes of US radio series including The Twilight Zone, Wrath of the Titans, Vincent Price Presents, The Further Adventures of Sherlock Holmes, The Perry Mason Radio Dramas, The Classic Adventures of Sherlock Holmes, The Father Brown Mysteries, Raffles the Gentleman Thief, Kincaid the Strangeseeker (this list goes on for a while - you may want to fix yourself a sandwich), Logan's Run: Aftermath, The Adventures of Harry Nile, Fangoria's Dreadtime Stories, Allan Quatermain and the Lord of the Locusts, The Prince of the Pauper, The Hilary Caine Mysteries, Murder and the Murdochs, Jeeves and Wooster, theNew Adventures of Mickey Spillane's Mike Hammer an his award-winning adaptation of The War of the Worlds. Told you it would take a while. Hey, what's on your sandwich? Cool.

Matthew is the editor of several volumes for Wordsworth Publications in the UK, his articles and fiction have appeared in Scarlet Street, SHERLOCK Magazine, Sherlock Holmes Mystery Magazine and DVD Monthly, and other short stories can be found in the collections Mammoth Book of Best British Mysteries 8, Curious Incidents 2, Gaslight Grimoires and The Game's Afoot. He lives with his wife Gillian, daughter Megan, two cats and an inexplicably large mortgage.

Creature from the Haunted Sea (with Matthew J. Elliott and Ian Potter)

Invasion of the Bee Girls (with Matthew J. Elliott and Ian Potter)

Sherlock Holmes and the Deadly Necklace 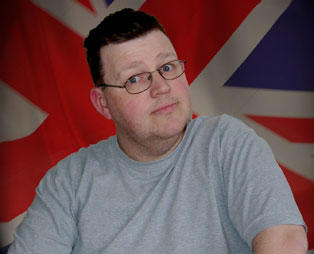