Joshua Fruhlinger was born and raised in Buffalo, New York, leaving him with a love of chicken wings and a tendency to say "pop". He taught ancient Greek and Roman history to undergraduates before fleeing from academia in terror; worked for a failed San Francisco dot-com that did not supply him with stock options or an Aeron chair; lived in Berlin, where he mostly ate Indian and Ethiopian food; and finished in third place on his sole Jeopardy! appearance (the correct answer was "Golda Meir").

In 2004, he started the Comics Curmudgeon, a blog that analyzes, mocks, and sometimes grudgingly respects the daily comics. It currently boasts more than 18,000 visitors a day, who tune in to learn about Rex Morgan, M.D.'s homoerotic subtext, For Better Or For Worse's antifeminist agenda, and Crock's terrible art and jokes. He also has a column on the political blog Wonkette.

He currently lives in Baltimore with his wife Amber, to whom he owes everything, and his cat Hoagie, who would also like some of the credit but would settle for more than the two cat treats a day she has been alotted. 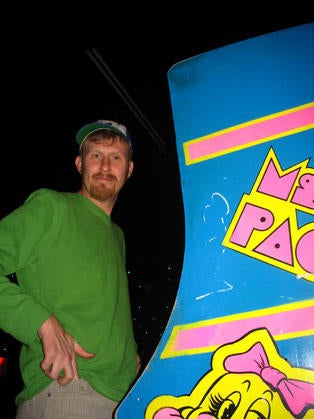