Hailing from Seattle, Washington, and blessed with Irish and Nordic ancestral roots, Joel McHale is one of the whitest and fairest stars around.  Armed with sunscreen, his Mariners jersey and plenty of Wellbutrin, Joel became a cast member on Comedy Central’s “Almost Live!”

Joel managed to complete the Actor’s Training Masters Program at The University of Washington where he honed his acting craft, played video games incessantly and discovered his passion: single malt scotch.

Finally seeing his day in the sun, Joel took off for Southern California to pursue a future in acting and fell in love…with Korean BBQ.  Well satiated with marinated beef, he quickly landed roles on “Will & Grace” and “CSI: Miami.”

Now he is the star/ writer / producer of E!’s “The Soup” which satirizes pop culture and current events.

Obsessed Joel McHale fans or bored people may also recognize him from “Spider-Man 2”, “Pushing Daisies,” and “Lords of Dogtown.”  He also entertains fans around the country with his stand up comedy.

Currently, Joel stars opposite Matt Damon in the upcoming Steven Soderberg film “The Informant” and is the star of NBC’s new comedy “Community” which airs in the fall of 2009.

Joel played tight end for The University of Washington’s National Championship football team and now lives with his hot wife in Southern California.  He likes all animals…especially chicken.

Check out Joel's other projects at his website: www.joelmchale.com! 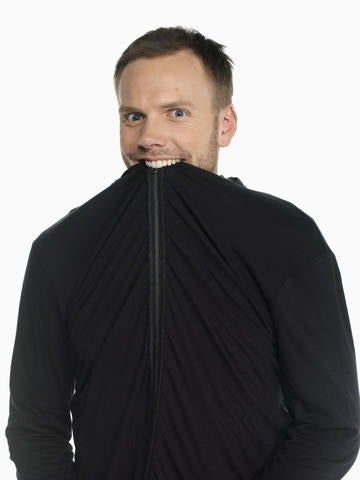