Ian Potter is a writer, performer, sound designer and occasional table. He was born in England, in an obscure coastal town called Liverpool. He is almost certainly the most famous person ever to have lived there.

He’s written plays for the stage, comedy, drama and documentaries for BBC radio, and written jokes and done obscure researchy things and for UK television shows. Some of them were so obscure even his mother didn’t watch. He’s also scripted a number of audioDoctor Who dramas and short stories for the very lovely company, Big Finish, whose stuff you should definitely seek out if you enjoy the sounds of fine British dramatic voices, epic explosions and weird stuff breaking out.

For 13 years he was a curator of TV at Britain’s National Museum of Photography, Film & Television, which was far less whatever you think it is than it sounds, and it was here he learned to write about himself in the third person. As a result he’s written an enormously detailed book on British television history which brings in surprisingly large royalties as a result of lazy students photocopying big chunks of it and never reading it.

He now lives in penury, in Sheffield, England with a wife, a vast pile of books that keep threatening to come in handy and dreams, so very many dreams. Most of them mundane.

Creature from the Haunted Sea (with Matthew J. Elliott and Ian Potter)

Invasion of the Bee Girls (with Matthew J. Elliott and Ian Potter) 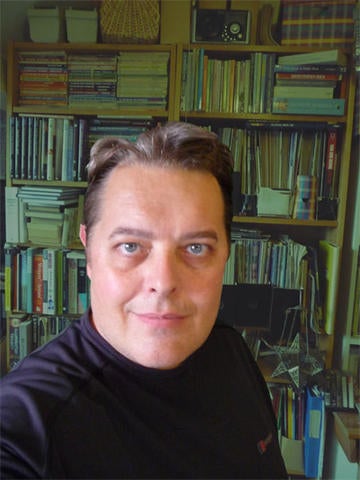