Originally thrust into the world of RiffTrax due to fluke circumstances, (mainly due to the fact that DisembAudio's voice was the absolute, rock bottom, cheapest one available), he has since become a beloved institution within the RiffTrax universe. He boasts an army of followers, "DisembAudio's Squadio," which has been compared to the "Claymates" of former American Idol Clay Aiken, in both their numbers and their tendency to be comprised of mostly middle aged house wives and gay men.

DisembAudio entered the world of Voice Synthesys against the wishes of his parents. His father was one of those toy monkeys that bangs cymbals together and his mother was a dumpy level, an instrument used for surveying. They had hoped that DisembAudio would choose a more respectable career, such as the button you press before you cross the street, but for a young child with posters of the voice of KITT and Dr. Sbaitso on his wall, such a boring career would not do. DisembAudio left home in the middle of the night and hitchhiked to Hollywood, serving as a CB Radio companion to lonely truckers in order to pay his way.

In Hollywood, the work came rolling in. Appearances on pop albums led DisembAudio to be the first artist since the Beatles to appear on seven of the top ten hits at one time. He landed a job as Governor Arnold Schwarzenegger's personal vocal navigation system (he still has rashes from being installed in that Hummer). And of course, he met up with Mike Nelson at the RiffTrax studio. 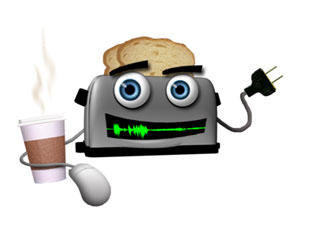