Chad Vader is the younger brother of Darth Vader. He was horribly disfigured in a boyhood accident involving a bicycle, an embankment and a volcano. His life was saved by a hand-me-down life support suit from his older brother, but unfortunately the suit was not able to save Chad's social life. Chad became a stockboy at Empire Market and eventually worked his way up to Day Manager. His main goal is to become General Manager, but he would also settle for a career as a movie star.

Chad's interests include collecting decorative plates and being the day manager of a grocery store. Turn-offs include weakness, incompetence and the night manager.

The internet series based on his life "Chad Vader: Day Shift Manager" has been viewed over 11 million times worldwide and has been featured on Good Morning America and VH1's "40 Greatest Internet Superstars". It has also been featured in The New York Times, Washington Post, Wall Street Journal, TV Week and Metro UK. The creators, Matt Sloan and Aaron Yonda, have been operating as Blame Society Productions since 2002. The entire Chad Vader series, as well as many other comedy series and shorts, can be viewed at blamesociety.net. 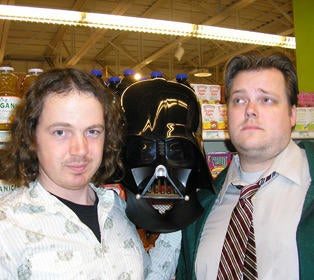