Yor, the Hunter From the Future - Commentary by Garrett Gilchrist

Yor, the Hunter From the Future - Commentary by Garrett Gilchrist

Reb Brown from MST3K's Space Mutiny in one of the best bad movies of the 80s, a very funny 1983 film about a very blonde, very stupid caveman who fights both dinosaurs with an axe and robots with a laser gun.

He wanders around aimlessly and every single civilization he comes across, he destroys completely, with fire and with flooding. There's no thought process to this, or to this film. Yor destroys simply because he is.

He is accompanied by the jealous, spiteful Kallah, who has some crazy 80s hair going on, and attempts to kill anyone else who hits on Yor. There's also Pag, an old man who loves his hemp. There are evil blue cavemen, and evil grey cavemen. It's nice that evil is color coded.

It all ends up in a sci-fi city for some reason, with the ridiculous villain The Overlord, who probably likes to play Dungeons and Dragons, and some pretty pathetic future people.

By the end of it, our hero has killed everyone who isn't him and doomed the entire future of humanity, as his epic 80s Queen-like theme song plays! Yor! Hunter from the Future!

Not currently on DVD, but easy to find online. Although I have the VHS, the copy of the film I used specifically for this riff is a widescreen AVI taped off of Turner Classic Movies and found on a pirate torrent website. You can probably find that exact same AVI yourself. This track should sync to any other version as well. The film has been released on DVD in Germany. 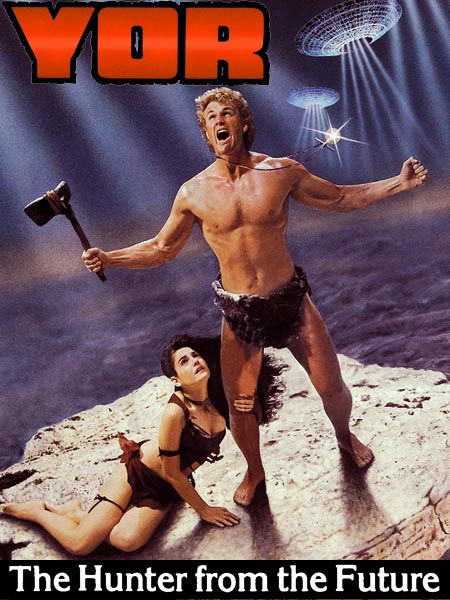