Underworld: Rise of the Lycans - The Two Man Band

Underworld: Rise of the Lycans - The Two Man Band

Sequels, prequels, remakes, and re-imaginings...for years, it seemed Hollywood had run out of ideas.  But then came the Underworld series, with the most original concept yet: Vampires and werewolves fighting each other!  And it only took a solitary sequel before the makers realized, "Hey!  Let's make movies that happened BEFORE the first one!  It worked for Lucas, right?"

Yes, for those who simply CAN'T WAIT for the new Twilight movies, this will wet your appetite for blandness and crappy vampire on werewolf action.  And yes we do imply both meanings to that sentence...let's just say, you'll never look at cliffs the same way again.  But hey, at least nobody sparkles.

The One Man Band (no stranger to lame werewolf movies) and Moleman (no stranger to violent, cinematic overindulgence) unite to not only drive the final stake into the coffin of this blue-tinted snorefest, but to make sure the only "Rise" you'll get from this movie is a few chuckles.  Well, and maybe bile...we're humorists, not miracle workers.

Be prepared to witness this action pa--no, wait...this horror/thrill...no...this well-acted dram...uh...hmm...well uh, this...OK, we're not sure WHAT it is.  But remember this:  In the Underworld, there is no depth we can't sink to.

NOTE: The sample contains slightly naughty language.  The riff isn't as naughty as the movie, but use caution in your workplace and/or elementary school. 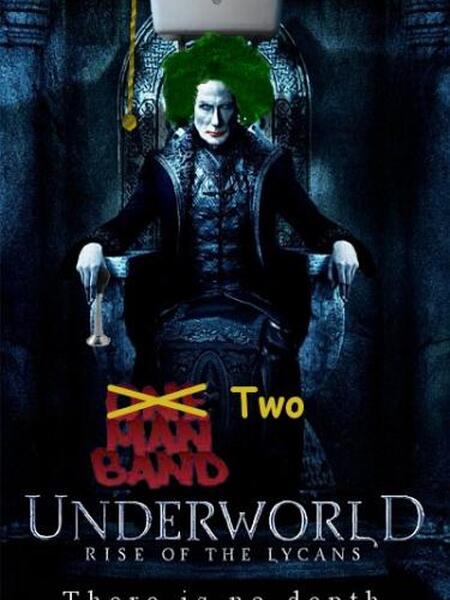