We are too quick to forget that our nation's freedom was once threatened by sinister men on horseback, brandishing swords while decked out in dark cocktail dresses.

From a lair beneath the ocean floor, skirted marauders led by the bulbous tyrant Unga Khan were poised to strike at our country using killer automatons craftily disguised as walking Expresso machines.

Fortunately, the United States Navy had their best wrestler on the job: the redoubtable Crash Corrigan. With the intermittent aid of a grizzled professor, an obnoxious kid, a marginal girl reporter, and a legion of able-bodied coneheads, Lieutenant Corrigan groped his way through Khan's minions for twelve consecutive Saturday afternoons... in one of the campiest movie serials ever filmed.

Mystery Science Theater 3000 revived interest in this tacky cliffhanger by riffing the first two chapters to shreds. Now BEMaven picks up the series where MST3K left it (in a crumpled heap), taking you on a tricked-out ride through the third installment.

Prepare yourselves for vintage Wrestlmania and an object lesson in what NOT to wear while battling for the fate of the planet. 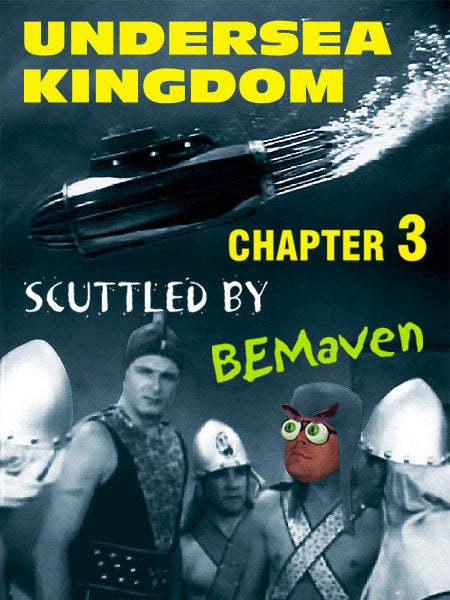