What is Duck and Cover? Have you been hiding under a rock or skipping history class? It's only the film with the latest dance craze, wall slamming. Actually it is the 1951 Civil Defese propagand film that tells you how to leave a lovely corpse silloette when the atomic bomb goes off. Watch the stupidity unfold as from the view of two broke rednecks with a Southern twang. Learn about strange new skills your new extra apendages will grant you after you mutate from radiation.

So you might wonder why would I want this. Well it is done by people who just might be the Harold P. Warrens of riffing. we too work on the most minimal budget. We too have poor equipment. And we too might be the worst riffers around. But we are having fun with it. So don't be afraid to take a look.

The 1950's propaganda film about how to protect yourself from an atomic bomb by ducking and covering up your head. (123.54 MB) 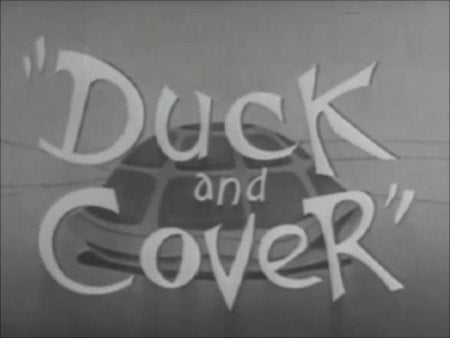