James, Ben, and Casey are three video rental store employees who work at a store that wishes it had a fraction of the business that Blockbuster has.  Brad Sherman, the owner of B.S. Video, has a questionable taste in the movies that he decides to play in the store.  Instead of succumbing to boredom or doing something completely insane, like doing their jobs, the trio decides to pass the time by making fun of the horrid movies that their owner makes them endure.

Titan AE is the story of Cale (Not Luke Skywalker) and his quest to free humanity from the evil Drej (Not the Empire).  Along with Captain Korso (Not Han Solo), Akima (Not Princess Leia), and Gune (Not Yoda) they embark on a quest to find the Titan (Which looks nothing like the Death Star).  Filled with characters and dialog that makes the Star Wars prequel trilogy look like Citizen Kane, this is one film that Joss Whedon surely wants to forget he ever wrote.

Written and performed by James Rosenthal (James of LinHood), Ben Rosenthal (MechanicalTorgo), and Casey Tripp with additional writing by Mike Hirsch (dignan) of the Rifftrax forums. 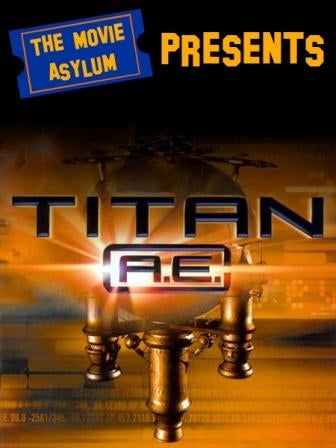