Popotan.... The anime series ass close to hentai as you can get with out and an x to youre rating. Don't get me wrong most of it isn't dirty but this anime was made to push toys to adult men. I know it has a deep involving story but it also has an inapropriatness that somehow made it past american sensers. So If you are not ya tall or an audult midget then a small portion of this anime isn't for you. What else is there to say but my riff fits this anime like penute butter and dasies a.k.a Popotan. . Besides that this series is about people on a journey where they get clues from flowers and also one of the characters loves puffy stuff. Lets just say if you're a fan of animes idiocincrisies. then you'll loves this anime and my iriff. 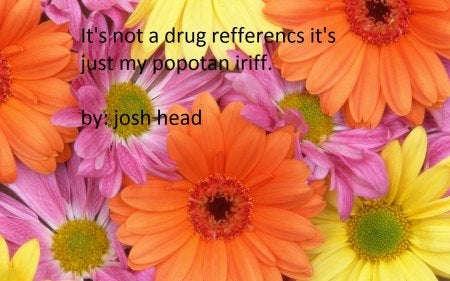 thinking with josh head and friends
Intended for mature audiences