THE SOUND AND THE STORY-MicroRiffs

THE SOUND AND THE STORY-MicroRiffs

O.k. so check it out.. A long time ago people would listen to music just for something to do. The well off could go to a music hall and hear it performed by musicians. Some people even purchased "Sheet Music" and learned to play hit songs themselves. In some upper-crusty circles being able to play a piano or violin was considered a social skill (Billy Joel would later reverse this public sentiment.) Then some eggheads hatched a sound idea,..."Wouldn't it be cool if you could hear music even if you were too poor to get into the symphony and too stupid to learn how to play?" Enter the wax cylinder...It sounded like ass and tripled ear wax stats. Audio overlords then decided to squish the wax like a pancake and encrust it with so much copper that it would make your mom  sweat and swear...we're talking a CRAPLOAD OF COPPER here!...... "THE SOUND AND THE STORY" takes you behind the scenes from symphony hall to the control (sniff) room to the final pressing, testing, re-testing, packing, shipping...every friggin stage of a vinyl record album.

Don't forget to comment and rate this riff and check us out at  microriffs.com  for more crazy fun. 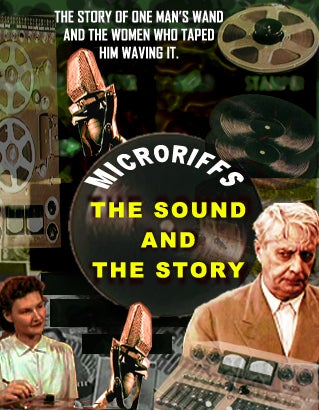