THE SNOW CREATURE - The Turkey Shoot with Scott Zee

THE SNOW CREATURE - The Turkey Shoot with Scott Zee

SAMPLE function not working for this title..Check  out  the clip

High in the Himalayan Mountains of Tibet, legend tells of a mysterious and most horrific creature. To locals - he is Yeti. To the tourists - the Abominable Snowman..and sometimes  the Yeti. To botanist Frank Parrish, he..is..not..really any form of vegitation that he can categorize or squirt it's enzymes into a petri dish.  But here, in one motion picture, the primal worlds of phytology and cryptozoology..COLLIDE!

As Parrish treks the treacherous snowcapped Trans-Himalayan slopes in search of-..plants!(again..the shrugging here) , fate deals him a most deadly encounter deep within the cavernous lair of the dreaded beast. Not at all resembling 7 foot specialty talent Lock Martin sewn into a suit of mange-infested daschhunds, the monster sets upon Parrish and his crew, only to be overpowered by it's own weakness of reckless stupity and total lack of logical discourse.

Spiriting the creature back to the United states, Parrish sees an opportunity not only to take advantage of this incredible find, but to convince the world botanists often do kick some major-ass! Our Yeti friend, however, quickly realizes, even with it's own limited cognitive attributes, that a walk-in fridge can easily contain your average Swanson chicken pot-pie, but not so much an 800 lb primate. Escaping via this knowledge, it descends on an unwitting urban setting, savagely stalking the seemingly good people of Los Angeles somewhere in California.

Now Parrish, aided by the LAPD, must utilize his new-found, botanically enhanced  hero-skills and save the remains of the day (the monster escapes sometime around 8pm) before gangly women and children fall prey to this most assuredly, abominable terror!

Will Parrish succeed? Hey, if you're talkin' 'botany', it's only a matter of 'when'. 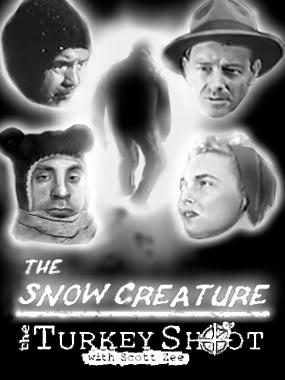