THE RETURN OF CHANDU - Chapter 9 - Hexed by BEMaven

THE RETURN OF CHANDU - Chapter 9 - Hexed by BEMaven

If nothing else, this twelve-part turkey trot demonstrates why you should never leave your travel plans in the hands of a goulash-tongued magician who did his training in the Mystic Orient.

In this ninth installment, the loopy intinerary of the Incomprehensible Chandu has left everyone stranded in the back lot of Lemuria. His tiresome family is being shuffled between a tribe of over-dubbed primitives and a cult of poofy-headed cat-fanciers. His lady love is still stuck in the Motel 6 of ancient temples. And Chandu is left to meander through caverns with Tyba, High Priest of the Great Unwashed.

Let BEMaven, Learned Mage Of Rage, guide you through a labyrinth filled with sordid crimes against fantasy and fashion. And watch for a cameo appearance by the BeeGees' Barry Gibb as a turbaned guard.

This is Part 9 of the Return of Chandu Crossover Project. Check out all of the chapters, each done by a different group of iRiffers, at http://www.rifftrax.com/iriffs/return-chandu-crossover-project. 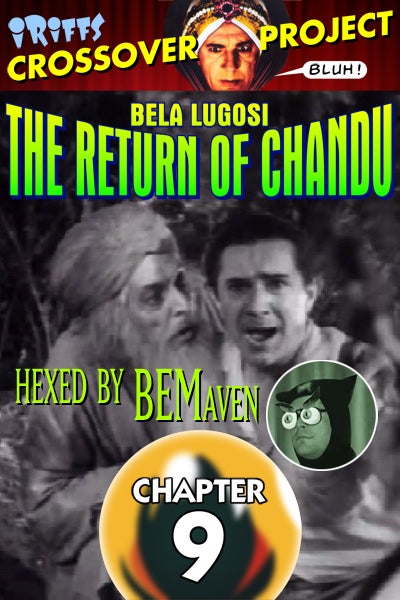