The Return of Chandu Chapter 11

The Return of Chandu Chapter 11

Just when you thought it was almost over--it isn't. Not by a long shot.

In this latest installment of Joseph Conrad's pulitzer prize winning serial from the 1930's--The Return of Chandu--Bela Lugosi stars as Prospero-like magician with a problem in a version of The Tempest so sexy the Taliban had it Cali-banned even in the 90's. Bela--Chandu--has no magic powers to speak of or at least refuses to use them, even when in basic Houdini-like situations even David Blaine could get out of (of course we always hope he won't). The ol' mojo isn't working if you get my drift. He has to be saved by an incestuous kid, he walks away from a sexy DAMSEL IN DISTRESS (perhaps he'd rather be damselled and distressed?), enjoys a little Fifty Shades of Great, joins up with the Joad family (who apparently took a wrong turn on the way to L.A.--Okies!) for a little sushi, gets knocked around a bit, and decides to RUN AWAY! Just your average everyday depression era hero, ladies and gentleman. I hear, in fact, this was written by old Clifford Odets (Barton Finked!) in an effort to bring socialist and anti-colonist ideas to poor sobbing Our Gang types who flocked to these serials in the 30's while their parents were out havin' a night of honky tonk drinkin'. Imagine the ride home. Mom and Dad drunk swerving down an unpaved Nebraskan dust-bowled road, cursing that the days of easy divorce are still decades ahead, kids in the back trying to make sense of what they just saw--in Chandu of course. And then, while the kids are discussing the merits of a post-agrarian, multi-racial island with a wall high enough to keep the Republicans out  (Odets, you're the man!) the car swerves into.....well, you get the picture. It's another nightmare Chandu episode complete with bone-crunching jump cuts, a dismal soundtrack (don't blame Sinsurround if you can't hear the actors whining), offensive stereotypes, a guest appearence by Miley Cyrus and Amanda Seyfried, and a number of dual nationals arguing their case before FIFA and losing--okay, I lied about the latter, but I'm listening to the classic Sparks album Kimono My House right now and it kind of messes with my mind.

Join spanking new (and God to we like to spank) Sinsurround Theater in the jungled outer reaches of extreme camp as we (who is this we? you are alone, dude) embark on our first riff.

I think you can find them here (the other chapters, not the upskirts):

If not acost anyone old enough to remember Chandu on the street. They'll show you WHERE TO GO...

And remember: Anything Chandu, you can do better. 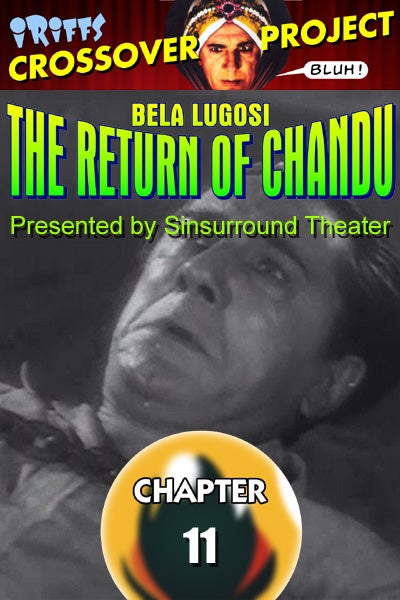