Ever wonder what really caused the Great Depression?  Spend 20 minutes with The Lost City, and you'll wonder no longer.  For the 1930s-era kids who spent all of their hard-earned pocket money to witness this slow, drab, action-free serial, great depression was the only logical response.

Considering that this thing is called The Lost City, the fifth installment has a noticeable lack of actual lost citying.  Instead, we are introduced to Chief Ben Ali, who seems unclear on how to pronounce his own name, and his wacky band of slave-trading Arabs, who spend most of their day scattering urns throughout their camp and wearing a wide assortment of outrageously large hats.

(Odd that a guy named Krellberg would choose to depict Arabs as a pack of goofy, treacherous weasels, but whatever.)

Meanwhile, Bruce employs more of his patented, limp-wristed punching technique; Butterfield visibly soils himself; Natcha performs a soulful interpretive dance routine while the menfolk wrassle; and Jerry, as per usual, is six kinds of awesome.  Also, I don't want to spoil anything for you, but Zolok might do some indecipherable growling.

Don't miss this "classic" serial that Amazon reviewers have called "seemingly endless", "black and white", and "an entertainment-bereft steaming pile of celluloid offal."  (Okay, I wrote that last one.)

And be sure to check out the other episodes in this iRiffs crossover project.  Collect 'em all, or you'll be forced to live out the rest of your life feeling weirdly unfulfilled!

(Note: This riff has been marked explicit due to some mildly salty language, but honestly, my two year old strolls around the house in his diaper saying worse things than this.) 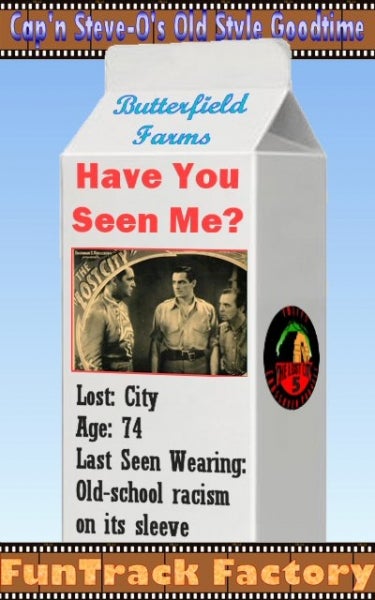