The Lion King 2: Simba's Pride - The One Man Band

The Lion King 2: Simba's Pride - The One Man Band

Before there was Cinderella II, before there was Lady and the Tramp II..but, um, not before there was an Aladdin or Beauty and the Beast II...there was The Lion King II.  While it perhaps may not have as terrible a reputation as the later direct-to-video travesties, Simba's Pride suffers from the distinct, unpleasant whiff of mediocrity.  Getting back the original cast doesn't mean much when you have to deal with Andy Dick in the bargain.

There's trouble in the Pride Lands, and we find out it's because our hero Simba (Matthew Broderick) has become a helicopter parent of the worst kind.  Besides overprotecting his belligerent daughter Kiara (Neve Campbell) and a dastardly wind that dramatically catches his hair every 35 seconds or so, he also runs into problems from all the lions he threw out a couple of years ago...to the point where the evil Zira (Bob Newhart's TV wife) wants him dead.  Gee, who would've thought throwing out all your enemies would make them HATE you so much?  But, the plot turns sour when Kovu (some guy, look him up yourself), Zira's puppet, falls for Kiara despite all evidence suggesting they shouldn't.  How does it all get resolved?  Well, in typical Disney fashion, with a bunch of songs.

Join the One Man Band as he pries this sucker loose from the fabled Disney Vault and gives it the big kick in the Upendi it needs.  Also, watch as the PPD makes his official (as opposed to a few unofficial) appearance as a riffer!  Unless he goes mad with power.  It happens, you know. 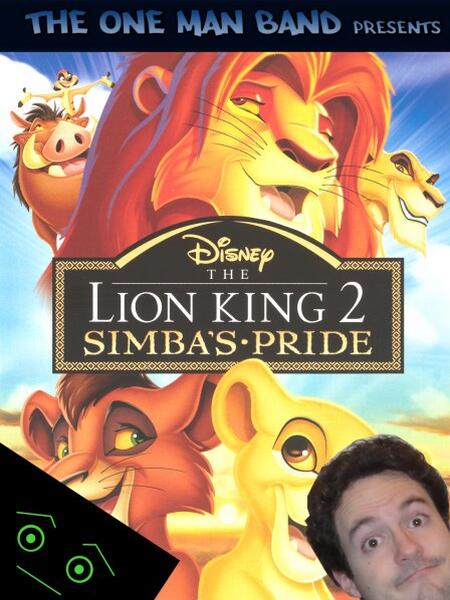