Once in every generation comes that rare movie which forever more defines that group's childhood.  For the Japanese it was Kimba the White Lion.  Unfortunately, those of us in America were stuck with the Lion King.  Join the future stars of Broadway's the Producers, the voice of Darth Vader and, of course, the 3rd villain in the Die Hard series for a musical romp* through the film that paved the way for High School Musical 2.

The team from the ThatGuyWithTheGlasses.com mixes humorous nostalgia, irreverant observation, a touch of homage to classic MST3K and some down-right mean spirited jokes to take you through this little adventure that will have you wondering, just what the heck does "Hakuna Matata" really mean?

* Word has reached us this isn't so much a romp as it is a musical death-march through Elton John & Tim Rice's nightmares.

NOTE: This is for the theatrical release version of the film.  If you have the "Special Edition" dvd, please follow the instructions on our FAQ to set up your DVD for use with this MP3. 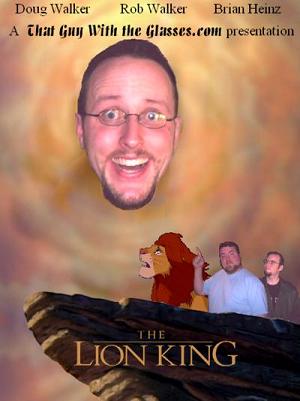 That Guy with the Glasses
Intended for mature audiences