A folder of government documents is in danger! ... And that's about all I understood of the plot of independent director Jeff Prahl's first original feature film, The Lincoln Project. In retaliation for a horribly embarrassment involving a homecoming tux and a can of Red Bull, Jeff's close and personal "friend" Insert Coin(s) to Continue rains on his cinematic parade.

Produced on a minimal budget and featuring a cast of Jeff's friends and classmates, the film
is a battle between directorial genius and narm-laden cheese.

Follow David Manson's and Nathan Burnett's chase around the world to exotic locations like London (shots of downtown Bellevue), LA (shots of Seattle), and Seattle (ironically, not using any footage of the very convenient Seattle). Grab on to your stupid hairstyles! It's like James Bond meets Mission: Impossible ... The High School Years. More fun than you can sneak out of an antiquities show in a champagne glass! 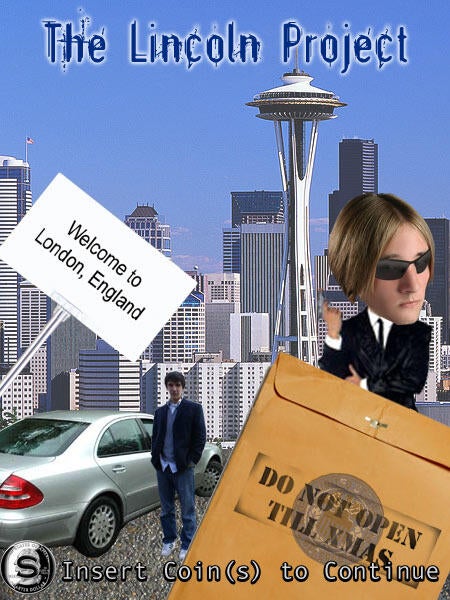