The Phantom Empire - Episode 5: "Beneath the Earth"

Thrills! Spills! Lots of subterranean action! These are things you won't find in chapter 5 of "The Phantom Empire." Also, no phantoms and very few empires.

From the people who bring you The Incomparable Podcast, this riff brings you California Angels owner Gene Autry playing the classic literary role of "radio cowboy." This episode is most notable for its groundbreaking content rarely seen in the 1930s, including a flame-throwing phallus, cross-dressing, and the promotion of a radium-enhanced lifestyle.

In this episode, Gene and his pals escape a slow-moving deathtrap, are hunted by an evil band of pith-helmet-wearing scientists, attempt to elude the might of the Thunder Riders and their sound effects, and ultimately make a journey Beneath The Earth (see what we did there?) to visit the cruel Queen Tika and her radium-rich and mildew-infested underground lair.

While you're at it, check out the other episodes of this serial at http://www.rifftrax.com/iriffs/phantom-empire 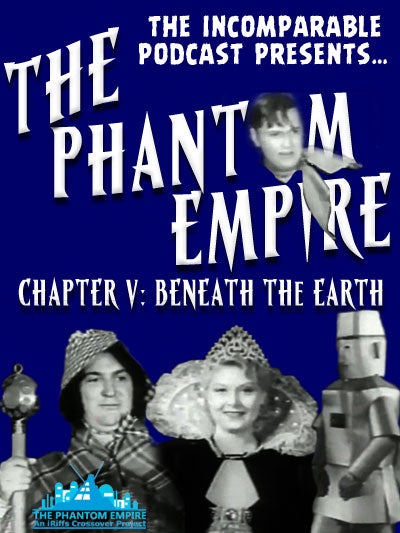