The Core (riffed by alabama)

The Core (riffed by alabama)

The Core is a disaster movie in every sense of the term. In this 2003 film the earth's core is halted, Whatever shall we do? The answer is obvious gather a ragtag group of scientists throw them in a penis-shaped ship and shoot them to the center of the earth. Elsewhere in the world stuff gets blowed up. Meanwhile a pale, skinny loser prevents world-wide panic controlling the flow of information on the web, what he calls "hacking the planet". Fuzzy logic, bad science and hollywood cliches abound as we delve deep into Aaron Eckhardt's chin. 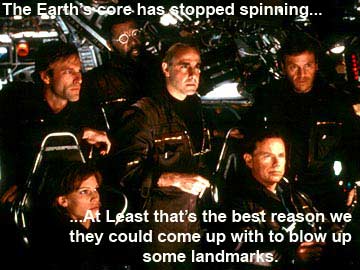