Mr. Wayne plays the swarthy Ghengis "the Duke" Khan.  Yes, it's true.  And while we mourn for this movie or at least impale it, we find ourselves frozen in time and unable to move until the drugs wear off.  Yes, drugs...which work wonders for Technicolor on the 60's version of IMAX: CINEMASCOPE! (?).  Yes, truly it was a time of Sputnik and some other crap but this is the forgotten history of American cinema (and for good reason).  If you like being burned at the stake then you'll love this carbuncle of disaster.  So here we go, John Wayne as Ghengis Khan and Pedro Armendáriz (yes, you heard correctly) as his brother.  The only one I vote for is the sizzling bacon hot Susan Hayward.  Supposedly she's also from the Gobi Desert but she's really quite Irish.  Watch native americans play mongols, white men play mongols, latinos play mongols and the partial cast of the Munsters as the Chinese guys.  Please be racially and ethnically sensitive as this film is not.  Aw, forget it, just enjoy the politically incorrect days, when man was king and men were women.  Enjoy! 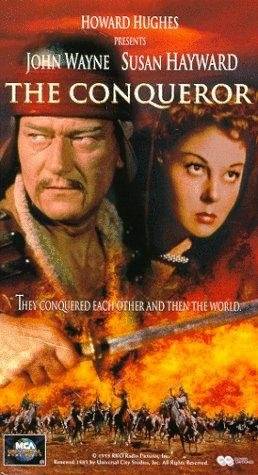