Starcrash! An amazing film from 1978 starring the luscious Caroline Munro and her minimalist wardrobe of leather space bikinis. David Hasselhoff's got eye makeup and a lightsaber, and Christopher Plummer IS the confused, golden-caped Emperor of the Entire Universe. An Italian Star Wars ripoff of the most blatant and inept kind, filmed in English, from a French DVD. See sexy space smuggler Stella Star do battle with amazon women for no reason! See stop-motion special effects that look like they were done by Ray Harryhausen's blind retarded brother! With a score by four time Academy Award winner John Barry (James Bond films), who clearly needed the money. Even by our standards this film beggars belief. This was released on VHS in the US by Roger Corman, but he actually cut out some of the more wonderfully awkward moments. I've based my riff on the French version, "Le Choc Des Etoiles," which is uncut, and available in a 2-DVD set featuring a making of documentary and "Starcrash 2," an even worse movie featuring none of this movie's cast and all of this movie's effects. Cheapskates will be able to find this version online somewhere. The film has also been known as "Female Space Invaders." Currently there's no legitimate US DVD release that I can recommend, but the film is not hard to find. 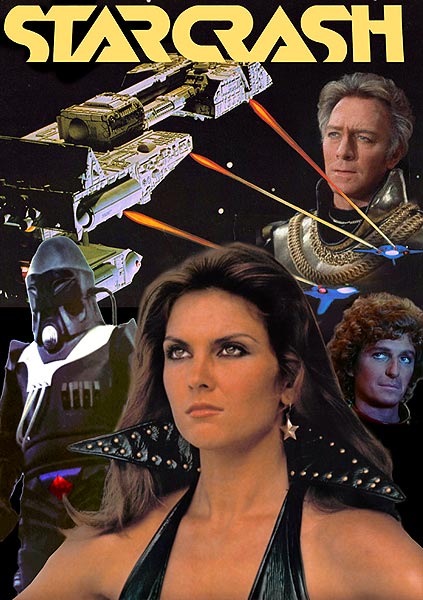