Back in 1977, an unknown little indie picture named Star Wars was quietly released.  It was a critical and box-office failure and has been criminally ignored ever since.  Now it’s time to dust off this obscure gem and give it the attention it deserves.

Blame Society Productions is Matt Sloan and Aaron Yonda -- creators of Chad Vader and a slew of other hilarious internet videos.  Listen as Matt, Aaron and Chad Vader himself riff on everyone’s favorite sci-fi sacred cow and reveal some startling secrets about the characters: the sickness and depravity of R2-D2, C3P0 and his “special friend”, and Darth Vader’s bizarre Neil Young obsession.  Chad Vader also waxes nostalgic about his relationship with his older brother Darth and tells a few stories from his own life.

Oh, and there’s also a bunch of boring “good vs evil” and “hero’s journey” junk too.  Enjoy!

This is the new DVD version of the movie with all the totally necessary digital "improvements" George Lucas made.

We'd like to give an extra special thanks Brad Knight, John Lee, and Tona Williams, and Courtney Collins who were integral to the making of this riff.  Thanks guys. 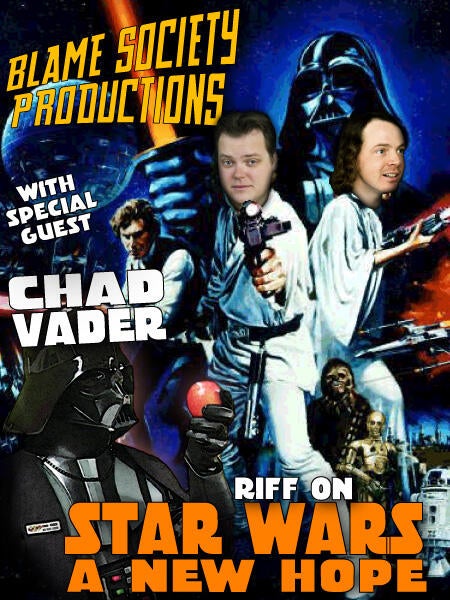