After the horror that was the majority of the original series of Star Trek, it is almost dumbfounding that they were ever able to make another series with the same name without being laughed out of the industry.  Fortunately they were given another shot, and out of this came arguably the best series of Trek to date.

This series, however, had to fight to break free of the formula of the first.  This pilot episode is an example of how this transition was anything but instant.
Here we run through the maze of cheesy writing, poor acting, odd camera angles, and poorly recorded audio as I guide you through this adventure.

The newly launched Enterprise D is almost immediately assaulted by Q, an all-knowing but silly being, who decides to test the captain and his crew to see if they are advanced enough to continue exploring the galaxy.  From there it's all apples and jellyfish and no one knows what the hell is going on.  Now THAT's a show!

Expect to encounter hilarity as sci-fi references and general zaniness abound in this premiere Hexanym Studio iRiff!
Please note that this iRiff is for the pilot 1-part version of the episode, not the 2-part syndication version.

(Remember folks:  If you can't afford a movie or don't feel like renting, swing by your local public library and see what they have.  If they don't have what you're looking for, see if you can get it via Inter-Library Loan!  Free movies everywhere!) 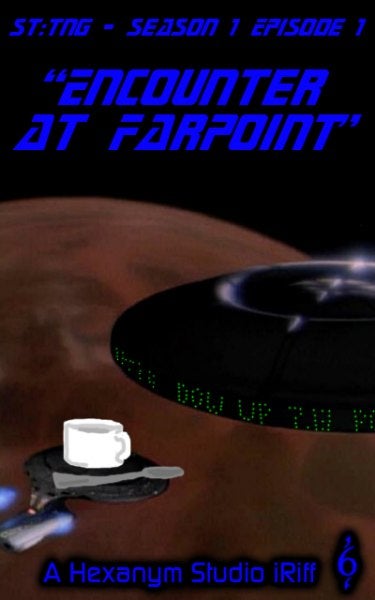