You WILL NOT BELIEVE the pulse-pounding, edge-of-your-seat excitement that is the end of season one of Star Trek: Voyager! Having amazingly made it home through strife and turmoil, the crew of the Voyager finds their home quadrant IN RUINS!!! The Federation in SHAMBLES!!! Desperately scrambling against an enemy who USES TIME ITSELF AS A WEAPON. The only area of the galaxy within which they could even HOPE to find some sort of saving mechanism? THE DELTA QUADRANT! So our intrepid crew is sent BACK, this time with specific orders to find technology to save their ENTIRE SPECIES-ES!!! The clock is ticking, and the stakes have just been raised A HUNDREDFOLD!!!

Wouldn't that be awesome? OK, here's what really happens:

Hey, kids, remember the Maquis? You--you don't? But it's only been ... uhh ... five episodes since they were last mentioned! Wait, what--seriously, FIVE episodes? My god, that's ridiculous! I mean, aren't they the dramatic thrust of the show? Aren't--sigh. Oh, forget it. Tuvok trains some cadets. "Hoosiers," it ain't. Together with intrepid co-riffer and co-writer J. Wilford Neville, Michael T Bradley sets out one last time to take on the crew of Voyager. We barely make it. CAN YOU?

Contains innuendo and mildly coarse language. Nothing worse than an episode of Robot Chicken.

And if you've missed any of the episodes so far, here's a listing of them:

107: Eye of the Needle - Riffed by QuipTracks

111: State of Flux – Riffed by TreacheRiffs 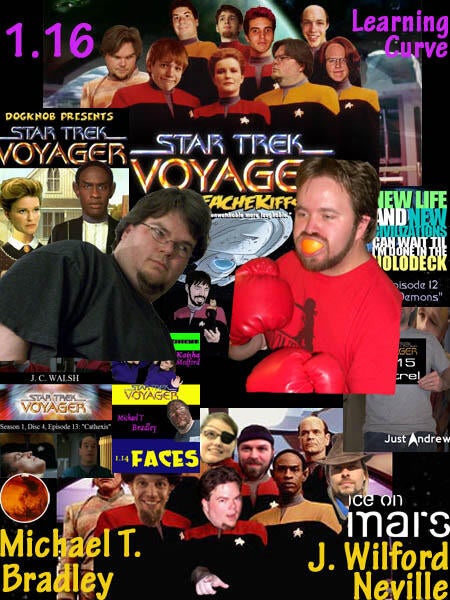