Not since Andy Warhol's Sleep has the screen crackled with such a dynamic sleeping performance as Robert Beltran delivers in the ST:V episode "Cathexis." Your heart will pound as he sleeps while Torres puts rocks on him! Your spine will tingle as he sleeps while the Doctor looks at him! Your brain might literally explode as he sleeps while Neelix stands near him! Please do not view unless sitting on a tarp!

All this hot sleeping action takes place before an equally thrilling backdrop: what begins as a standard Brannon Braga authored WTF-fest takes a shocking twist when it is revealed that an alien may be aboard Voyager! With this radically unusual turn of events, no one can be trusted, and Voyager's only hoping of restoring sanity (cough) is to place their faith in Chakotay's pseudo-spiritual talisman things because Native American!

Did I mention Robert Beltran got paid to sleep for a week? How are those TPS reports coming along?

Join J.C. Walsh watching his first ever Star Trek episode (I mentioned that too, right?) and jump in your PJs for the most sopor-IFIC! episode of Voyager ever! 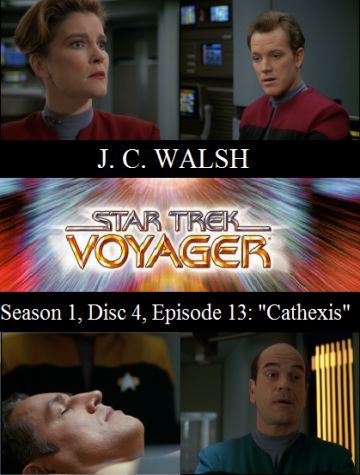