Finally, the Truth can be told....

When the Spring Break DVD was released for the first time in August of 2009, Anchor Bay spared every expense in bringing this classic 1980s college comedy to the fans.

In other words, there are no bonus features on the DVD at all (if you don't count the trailers for sor some OTHER crappy movies).

What were they afraid of? That the people who were THERE in Ft. Lauderdale in the summer of '82
would spill the secrets that have been left untold, lo these 27 years?

Did they think the fans couldn't handle the TRUTH?

So the cast of the movie got together to do what the studios were too cheap to do.

Or perhaps too afraid.

And so an idea was born.

Yes, the inmates have taken over the asylum.

The True Story, From Four Stars and an Extra

Join David Knell, Perry Lang, Jayne Modean, Steve Bassett and Jeff Garlin
(who was an extra in the film, but made a name for himself later)
as they share the true story of what happened behind the scenes during
the making of Spring Break in Ft. Lauderdale in the summer of 1982.

Stories the "Powers-That-Be" don't want you to know.

Get your copy today Before THE MAN
threatens us with legal action and we wimp out and take it down! 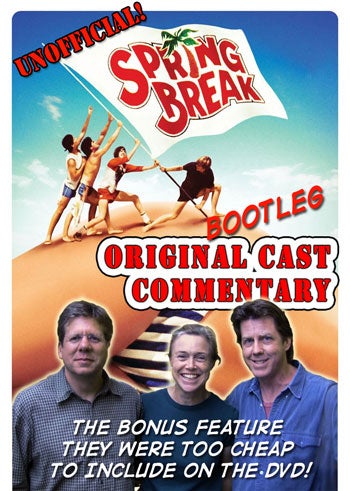