If you've ever had a favorite video game, then you're familiar with the desire to see your favorite game characters up on the big screen, where you can force the rest of your family to enjoy them. Well that's exactly what Mortal Kombat fans got in 1995 when the hit video game franchise became the source material of this paradigmatic cornerstone in bad video game adaptations. All your favorites like "Aren't" Lean and "Nameless guy who roars like a lion" are there, as well as some guy named Sonya. Scorpion and Sub-Zero are also in this movie, which doesn't make sense, because no one ever played as them. Sit back as "Special Jokes" takes you on an all-expenses-charged-to-your-credit-card tour of our childhood expectations being frozen and shattered in a way that's really hard to block. There's also a boat. From film and literature references to surreal absurdism to 17 fart jokes in a row, this melange of near-humor is sure to disturb almost everyone. And as always (starting now), there will be up to 100, and as few as 1 "Special" jokes in this Riff. Can you name them all? I can't, and I won't, so don't ask. 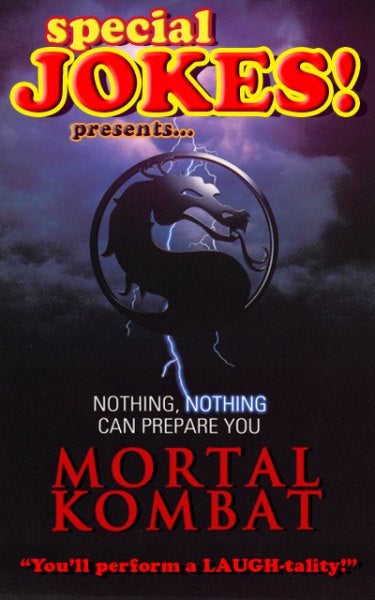