Speaking of Rubber: Personal Self-Discovery Through Synthetic Rubber Production - Riffed by "It's Better-Than-CSpan-Productions

Speaking of Rubber: Personal Self-Discovery Through Synthetic Rubber Production - Riffed by "It's Better-Than-CSpan-Productions

A fascinating world of self-discovery awaits as Grandpa waxes nostalgic and gets all waxy about his days at the rubber factory.

The old geezer (fondly known as The Wrinkled One), explains the marvels of rubber and how he loved

rubber more than his own wife and children.  The story of rubber both delights and saddens, while leaving one

with a sense of patriotism and betrayal.  Amazing facts such as:

Yes,  this Lifetime drama (not really) concludes with a strange and emotional monologue concerning God, Rubber, Patriotism, Family and well...Rubber.

I won't give away the ending as it is...unbelievably...a cliffhanger into the soon-to-be riffed, "Speaking of Rubber Part II:  More Rubber, Less Talk"

Should be an essential part of a liberal arts curriculum as well as being fairly stupid. 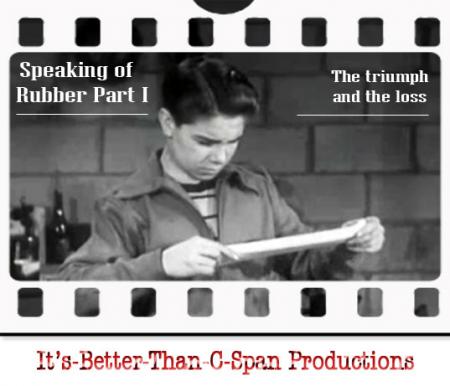