After 150 years and over 50 film and TV adaptations, what is there left to say about A Christmas Carol? Plenty, if you’re talking about one of the most jaw-droppingly dreary versions ever to hit the silver screen. 1935’s Scrooge starred Sir Seymour Hicks, a British thespian famous for his many portrayals of Ebenezer Scrooge, both on film and on the London stage. With all that practice (including starring in an earlier 1913 silent film adaptation), you might expect Sir Hicks to give a pretty good performance. Yeah, dream on, Tiny Tim. His acting alternates between hysterics and sleepwalking, most of the time while on a single set that looks like it cost about fifty bucks... er, pounds, to hammer together.

The best way to enjoy the scenery-chewing antics of Sir Seymour Hicks is with three or four smart-a**** beside you to share your misery. Fortunately Johnny and his friends on the Big Brown Couch have volunteered! Join Dori, Becky, and Babs as they ease some of the celluloid pain.

Scrooge was visited by three ghosts on ONE night of his life... what a lightweight. Johnny has to put up with a trio of them living with him seven days a week!

This GHOSTS ON THE BIG BROWN COUCH presentation of Scrooge is a full Video On Demand presentation. Just download the video and enjoy (snacks not included)!

A word of caution: Scrooge (and its intro and such) contains some mild language from the riffers (nothing worse than you’d see on network TV). However, the naughtiest words have been carefully bleeped, because after all it’s almost Christmas. We don’t want to get coal in our stockings.

Special thanks to our generous and impressive guest talent, announcer Nick Koontz, guest star Lisa Graham, who plays the lovable (er, but don’t get attached to her) Mrs. Hinkle, and writer/director Joseph O’Brien as The Grim Reaper.

An EXTRA special shout out to cast regulars Dori Fleischmann and Catherine Wacha, who gave their all to their continuing roles, in spite of having recently lost their home to  that b***h Hurricane Sandy. There is dedicated, and then there is you guys. You take it to another level. 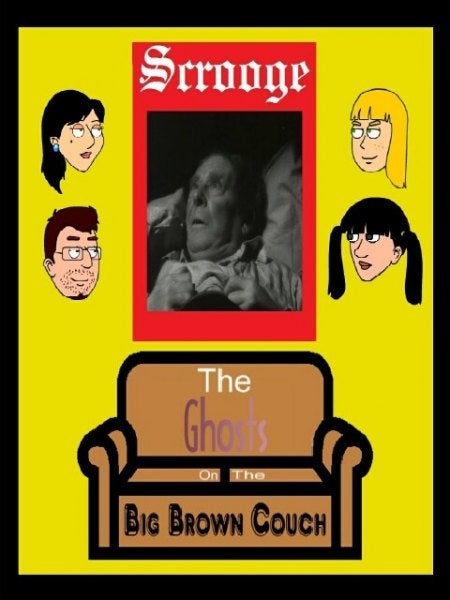