In 1984 Frank Herbert's classic sci-fi novel came to the screen.  Sort of.  At 137 minutes they were able to fit roughly 12% of the plot of the densely detailed tome, most of it in the last half hour.  It was a trade off, because otherwise how would they fit in references to feline molestation.

Yes, it's Dune.  A movie who's very title causes muscle spasms and blurred vision among some movie fans.  A dazzling jumble of sun drenched sand piles, obese men with floating rigs, bald women, and Sting's nether regions barely concealed by arrow shaped underwear.  Anyone who hasn't clicked away from this page and description in horror by now feel free to join Ronin Fox and Vamperica with ammunition from RVR II as we skewer all the Kwisatz Haderachs and Landraads and Mentats and all the other things I had to check Wikipedia to see how to spell.

Keep in mind this is for the Theatrical Cut of the movie with a run time of 137 minutes for NTSC or 130 for PAL.  It will not sync with any extended cuts of the movie.  If you're not sure which one you have, look for David Lynch's name in the credits.  If it's there, it should sync.  If not, it won't.

Explicit content:  There is naughty language in this track, making it verbally naughtier than the movie's PG-13 rating, though once you actually see the mouths on the Guild Navigators or all the worm imagery perhaps it'll seem fitting enough. 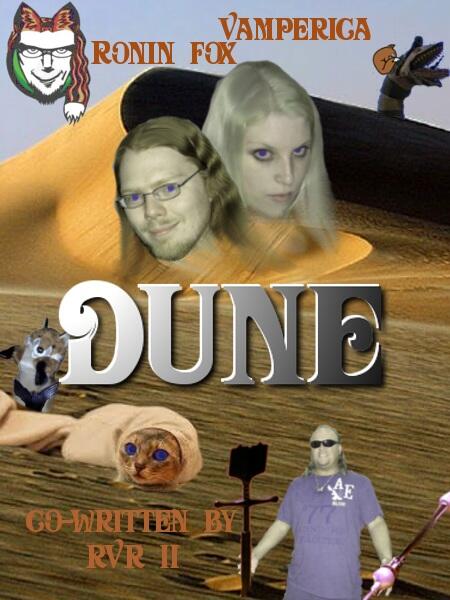