More action than you can shake a shell at, more cheese in the plot than on the pizzas...and VANILLA ICE!  Yes, RiffDuck takes you on a journey with the Teenage Mutant Ninja Turtles to find out just what exactly was the big secret behind that darn ooze!  Maybe the secret lies in the fact that four mutant turtles raised in New York somehow speak West Coast slang.  Who knows?  Certainly not the Shredder since he's too busy doing a crossword to actually be bothered with fighting in this movie.  But no worries!  He's got his grunting henchman Tatsu on the job as well his secret weapons: Bebop and Rockstead-uh...Laurel and Hard-wait, um...Milo and Oti-Tokka and Rahzar!  That's the ticket!  It will take all of the Turtles' deadly but kid-friendly ninjitsu skills to make it out of this one.  But they're not alone as a brand-new smokin' hot April O'Neil joins their cause along with Sark from "Tron" and Prince Tarn from "Red Sonja" (but whatever, you only know him from "Surf Ninjas" anyways)!  The stakes are high and the Ice is cool in the Ninja Turtles 2nd installment!  You know, the one right before the REALLY bad movie about time-travelling to Feudal Japan?  THAT one! 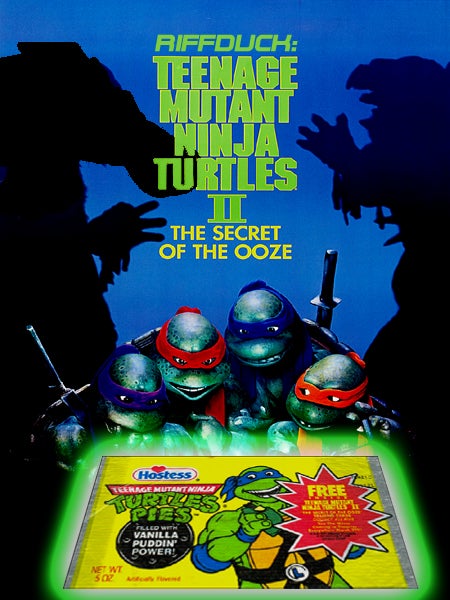