Today's genre-hopping adventure takes us to 6th Century Denmark, where Beowulf (Ensign Harry Kim) has just arrived to slay the beast Grendel and save the kingdom. With jutting chest and piercing gaze, he heroically soils his pants and is immediately devoured.

Today's genre-hopping adventure takes us to 6th Century Denmark, where Beowulf (Chief Medical Officer.exe) has just arrived to slay the beast Grendel and save the kingdom. Armed with magical hologram powers and more than half an IQ point, he has a bit more luck.

Yes, it's Star Trek Voyager, Season 1, Episode 12: "Heroes and Demons!" Wow, we didn't lose you at "Voyager"? Well good, cause it's actually got a lot of plusses: the alien isn't a walking forehead prosthetic, the most competent actor of the bunch (Robert Picardo, followed closely by Kate Mulgrew's hair) gets the spotlight, and best of all, Neelix is COMPLETELY ABSENT. Then again, it IS basically Star Trek Voyager meets Dungeons and Dragons.

So curl up with a flagon of mead and a leg of spit-roasted elk, and help us sacrifice another episode of Star Trek Voyager to the riffing gods!

Check out the rest of Voyager disc 3! 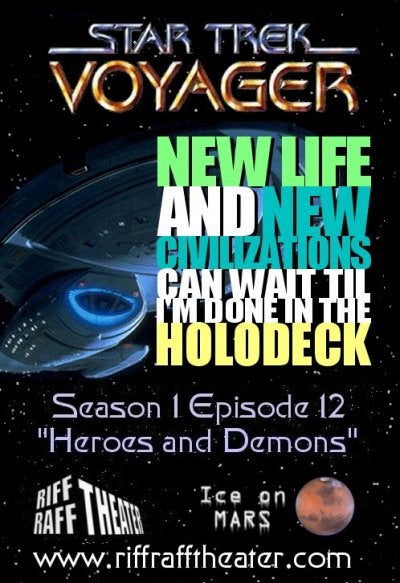